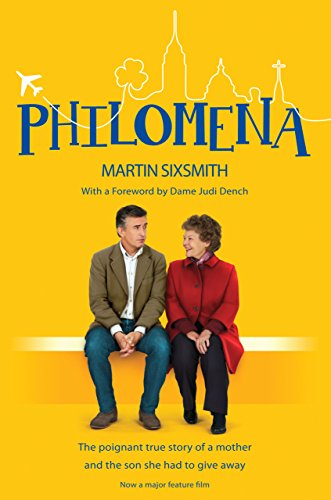 Join us for our first book of 2022! We will be discussing Martin Sixsmith’s book Philomena. Then we will watch the movie (it’s been a while since we’ve done that)! Please wear a mask.

When she became pregnant as a teenager in Ireland in 1952, Philomena Lee was sent to a convent to be looked after as a “fallen woman.” Then the nuns took her baby from her and sold him, like thousands of others, to America for adoption. Fifty years later, Philomena decided to find him.

Meanwhile, on the other side of the Atlantic, Philomena’s son was trying to find her. Renamed Michael Hess, he had become a leading lawyer in the first Bush administration, and he struggled to hide secrets that would jeopardize his career in the Republican Party and endanger his quest to find his mother.

A gripping exposé told with novelistic intrigue, Philomena pulls back the curtain on the role of the Catholic Church in forced adoptions and on the love between a mother and son who endured a lifelong separation.